Welcome to the World of

See what the latest plans and projects are for the band.

It is very stimulating and challenging

to meet and work with different artists even thogh they may come from another kind of musical landsacpe.

Some in Swedish and some in English. 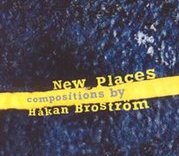 In 2005 Håkan Broström   was  asked to do   a so called "composer portrait" for the Swedish record label Phono Suecia. With a more generous budget than what is  common for jazz recordings he had the opportunity to record  seven compositions for big band and five for a 9 piece string section. The CD was named after one of the compositions  "New Places".

5 years  later in the spring of 2010 Håkan was asked by jazz club Fasching to put together a big band for series of concerts with various guest artists. The band needed a name and "New Places Orhestra" was born.